The big news in Chicago today is how Carol Moseley Braun failed to show how $315,000 was spent during her 2011 mayoral campaign. State law requires that all candidates file the proper documentation showing how their campaign finances were spent. Rahm Emmanuel, Gery Chico, Miguel del Valle and Patricia Van Pelt Watkins all filed the proper paper work–even Rahm documented his Starbuck’s purchases.

Back in April, Moseley Braun showed that she raised $323,000 and spending $315,000. And that’s where the trail stops–sort of. According to the Chicago Sun-Times, Moseley Braun’s campaign listed expenditures over $150 as “Vendors Multiple.” This action is considered a big no-no in Illinois.

When I heard this earlier, I was really hoping that Moseley Braun would finally show some class and professionalism, and admit to screwing up royally. Instead, she shoves the blame toward her long-time friend and former-Braun campaign treasurer, Billie Paige.

Back to the Sun-Times:

” ‘If Billie Paige neglected to do so, it doesn’t surprise; she is elderly and overwhelmed,’ Braun said in a brief telephone interview.”

“Paige, who has been a friend for 34 years, introduced Braun when she announced she was running for mayor in November 2010. “I introduce to you the serene, courageous, wise person, the next mayor of the city of Chicago, my friend, Carol Moseley Braun,” she said before the two embraced.

Paige, a Springfield lobbyist at Shea, Paige and Rogal, whose clients include General Motors, METRA and AT&T, said in a written statement she resigned from the campaign the day the disclosure form was filed, April 15.”

Ok..let me get this straight. Braun, a former US Senator (the first Black woman to ever be elected to that office), as well as the former US Ambassador to New Zealand and Samoa, isn’t on top of her campaign finances? Seriously? Considering her history with the whole pesky world of campaign finances, she would’ve learned something. You’d think that in this day and age, candidates would be a scosch more savvy about such things now that anyone can research that type of information on the Internets. Yes, it’s good to hire smart accounting folks but it’s also necessary for the candidate to double-, even triple-check every financial document that will be examined by the public.

Instead, she blames an old friend. Klassy.

Nothing legal will probably come out of this fiasco, but it would be nice to see Moseley Braun own up to it, take her lumps and move on never to run for public office again. However, it appears she doesn’t have either the guts or the smarts to do just that. Too bad because I kind of liked her moxy once upon a time.

No wonder the public mistrusts politicians so much. But at least she’s out of politics now.

Too bad we’re not dealing with Lloyd Braun. 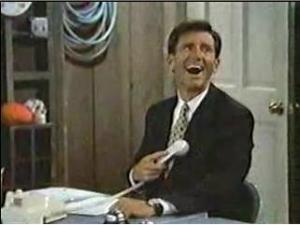 I would like to thank whomever thought of this award, and for giving a kid from a West suburban, upper-middle class background a chance! I don’t know where I’d be without a stable family, a good education and the opportunities awarded to someone of my class.

Today, I sit at my MacBook Pro before my two cats, a messy apartment, “The Town” showing on HBO for the gazillionth time, a winner of the Versatile Blogger Award. Who is responsible for bestowing this honor upon McCrabass? Why it’s none other than the fabulous Sandra who writes the faboo blog, She Can’t Be Serious.  This also means that someone chose my blog as one of their 15 featured blogs. My mission, along with walking the Earth and ridding it all things bad with my Ouiser Boudreaux wisdom, is to pay it forward by honoring 15 blogs I find to be apex of awesome.

During my tenure as an award recipient, I must agree to the following conditions:

1) Thank the person who gave me this award and link them back to their post.

3) Pass this award along to 15 recently discovered blogs and let them know about it!

1) I worked in Hollywood for a long time in post-production. I actually worked in the field I got my degree it–a first for many and very rare in this day and age. I left because I got tired of being treated like crap by a handful of people who had all the power–undeserved power. Being yelled at by someone because their Starbuck’s wasn’t foamy enough is a big bowl of wrong. I don’t care how many men you blew to get your job.

2) I’ve had the chicken pox twice, and have been bitten by a Black Widow Spider once.

4) Contrary to what the public seems to think, I don’t think clipped cat hair would make a good sweater.

5) I could watch “Godfather Pts I & II” over and over again. Same with “Just Wright.” Somewhere between those three choices is sanity.

7) If you tell my parents about #6, I’ll have to hunt you down and cover you in cock rings.

Now, for the blogs I dig and are now also worthy recipients of the Versatile Blogger Award. Some are funny, some more serious, but they’re all worth a look. Please check them out–I know you’ll find something within them you enjoy. If not, you’re dead inside.

Tortoise off On a Wild Hare!

Throw Grammar From the Train

I’ll probably add more over the next few days. Until then, please read them. Hell, even subscribe to them. They’re worth it. Trust me!