I worry about the future of this country.

Wait, scratch that. I worry about the future of the human race.

What the entire crap? I have no idea who this is because I’ve never watched this show. See, I have issues with embracing mediocrity so I don’t watch reality tee vee. Most of the folks featured on such shows are complete half-wits, and it disgusts me that they have jobs & make shitloads of shekels for being dicks on national tee vee. Meanwhile, I did all things right and am staring down 17 months of unemployment. Land of opportunity? Yeah, sure, if you’re a choad with big tits.

“If a dollar makes her holler we can only imagine what Toddlers & Tiaras star Alana Thompson thinks of her new spin-off.

The breakout star of the controversial TLC show, who won her way into our hearts with her “honey boo boo child” refrain, has inked a new spin-off deal with TLC. Us Weekly reports that the show will be appropriately titledHere Comes Honey Boo Boo and will premiere with 6 half-hour episodes in August.

The show will reportedly take a look at the little girl behind the go-go juice, following around Alana and her family as they live their lives in rural Georgia. Alana’s family is no stranger to reality television, her mother was featured on Extreme Couponing before appearing on Toddlers & Tiaras.

If you are unfamiliar with Alana and her magical one-liners, please do yourself a favor and check out the video below. You will not regret it!”

Alana’s new spin-off won’t be the first Toddlers & Tiaras spin-off. Tiny pageant queen Eden Wood landed her own spin-off, Eden’s World, on Logo, but the show has garnered mixed reviews and lackluster ratings. Alan’s spin-off will be the first TLC spin-off from their popular series.

All we want to know is why did it take so long for Alana to land her spin-off?”

Let me get this straight. Some dirt farmers in Georgia (of course), breed and give birth to a brat with blonde locks. So, they dress her up and pimp her out at those baby beauty pageants where she gets to strut her stuff (so wrong I wanna crap myself) and say sassy things to those around her, and watch her mom grow more chins. 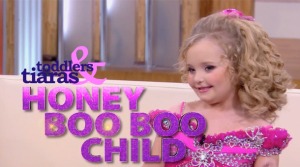 Sometimes I wish I was born dumb.

This is a poor example of life imitating art. From Inquisitr.com

America has had enough of shitty behavior by those in charge of college football programs. While what Coach Franklin said wasn’t nearly as deplorable as what happened at Penn State, it just shows the level of the mind that is in a position of enormous influence over young men. It also shows that stupid begets stupid.

“James Franklin, the head coach of Vanderbilt University’s football team, apparently has an interesting screening process for potential assistant coach applicants. Forget a strong resume and a solid interview:  He wants to meet the wives to make sure they are attractive enough to qualify as  “Division 1″ recruits.

As reported by multiple media sources, Franklin went on a local Nashville radio station and said the following:

I’ve been saying it for a long time, I will not hire an assistant until I see his wife.  If she looks the part and she’s a D1 recruit, then you got a chance to get hired. That’s part of the deal.  There’s a very strong correlation between having the confidence, going up and talking to a women, and being quick on your feet and having some personality and confidence and being articulate and confident, than it is walking into a high school and recruiting a kid and selling him.

According to Yahoo! Sports, Franklin got his inspiration from the film MoneyBall where a baseball scout opines that “Ugly girlfriend means no confidence.”

There are so many things wrong with this sentiment. First, you’re not allowed to ask anyone in any type of job interview their marital status. It’s illegal.

When they made James Franklin stupid, they made him real stupid. He should lose his job over this “oops” but he won’t because college football rules all, sadly.

Second, the Moneyball reference. If the ‘hot girlfriends’ line was all he got from the film, then he missed the message and doesn’t deserve such a position of power. Oh, and if memory serves, Vanderbilt’s record ain’t that great so it’s probably not wise to rely on Hollywood to help you turn a 6-7 team into a winning one. If Franklin had stopped yanking his pud over his perceived awesomeness of the hot wives mantra, he might have learned that Billy Beane bypassed that recruiting philosophy because it’s horsehit.

Finally, men like Franklin are dangerous to women. I know this type of man too well I’m afraid. Women, according to Franklin and his ilk, are only as valuable as their dress size. The smaller the size, the more they’re worth. They prove that sexism isn’t being bred out with each new generation.

Call me crazy, but the side of a highway is not a place I’d want to play with my kitty. I know, I know–SHOCKING.

But some women don’t have a problem with pearl diving as 18-wheelers go whizzing by. Especially this gal. Aaand, once again, Florida has the most people occupying Darwin’s Waiting Room (thanks Dennis Miller).

Do you need my commentary on this one? No? Good because I’m too damn tired. Please read here for more info.

I need a drink and perhaps a sedative.

5 thoughts on “Sliding down Crap Mountain”