” … you gotta learn how to shit in the tall grass.” My sage advice to Mr. Romney, courtesy of my late-Southern gentleman grandfather.

The presidential campaign is well underway and we’re already seeing some world-class bitching, pissing and moaning (and not to mention straight-up lying) from the Mitt Romney campaign. Oh, but Mitt’s whining is epic.

Last week, Boston Globe reporter Christopher Rowland wrote a great story about how Mr. Romney left Bain later than the “official” 1999 date. Of course, Mr. Romney and his minions got their tighty whities in a bunch about the “accusations” (SEC filings sporting Mr. Romney’s name past 1999 aren’t “accusations”) and demanded the Globe print a retraction. The editor said no, of course, since the story was reported using cold, hard facts.

Bravo to the Globe and to Mr. Rowland to not bowing to the pressure of a billionaire who happens to be the former gov of Massachusetts.

Of course, the Obama campaign took this info and ran with it. And rightly so. In a recent interview, President Obama said  — paraphrasing here — that if Mr. Romney wants to use his success at Bain as his ticket to fixing the economy, he’s got to be completely open and honest about his entire tenure at the company, not just certain years. Oh and he has to release all of his tax returns.

Now, Mr. Romney is demanding that the President apologize for his comments, a request that met with a resounding NO from the POTUS. Why should he apologize? ‘Tis all fair game, correct? I mean, Mr. Romney is on the steering birther wagon by not disputing the whack-job part of the base that’s deep in his corner..you know which part I’m talking about — the folks who STILL believe the President wasn’t born here. By not slapping those folks down by doing what McCain did during the ’08 campaign (Google “Crazy McCain Lady”), and by  trying to keep Bain from being uttered by reporters during pressers, just proves that he lacks the courage and the integrity to lead this great country.

Mr. Obama’s unemotional yet firm NO is to be expected. He knows that there are other things that need attention during this campaign, so others are telling Mr. Romney to put his big boy pants on. My fab fave comment comes from my mayor — Rahm Emanuel on ABC’s “This Week”:

“Stop whining,” Emanuel said. “If you want to claim Bain Capital as your calling card to the White House, then defend what happened at Bain Capital.” 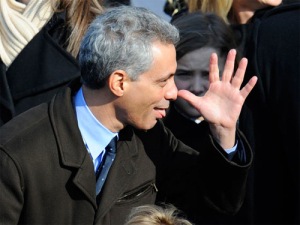 Now that Rahm has spoken, can we please get back to the important issues?