My apologies for not posting the past few days, and I’m sure my three readers are quite apoplectic about my absence. I’ve been covering a couple of YUUUUUUUUGE high-profile court cases in Chicago–all of which have been postponed until Dec. 17th and Jan. 31st.

For those of you who pay attention to the blood sport that IS Illinois politics, did you notice any familiar faces on the Beavers team? No? Yes? Short memories I guess. Sam Adam and Son are once again defending yet another notorious pol since they did such a bang up job with this one.

On a side note, I’ve interviewed Commissioner Beavers several times and next to this guy, he gives the best soundbites ever. 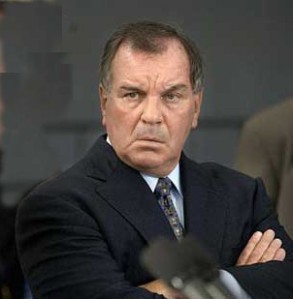 Now onto the serious stuff.

I thought the Nuge would be either dead or in jail by now. I hate it when famous people don’t keep their word. It really creases me. He needs to have some sense knocked into him–perhaps by that wang dang sweet poontang he claims to have had once upon a time.

Perhaps someone should inform his ugly ass that most welfare recipients are, um WHITE.

“Conservative rocker Ted Nugent is urging the Republican Party to “stop the insanity” and insist that voting rights be suspended for welfare recipients as a part of a larger budget deal.

In his Monday Washington Times column, Nugent ranted that talk about raising taxes on the wealthiest Americans proved that Washington was a “financial insane asylum.”

“What we need is a wholesale, top-to-bottom assessment of the federal government, and then we need to slash and burn all Fedzilla departments, agencies and offices that are not constitutionally required or deemed vital,” he wrote. “This should be fundamental before any deals are cut regarding new taxes.”

I don’t know what is more disturbing–his room temperature IQ when it comes to, well, everything, the fact that people still pay attention to him OR that he has an actual newspaper column.

The 1970s called–it wants Nugent back. Shit, he should never, ever be allowed to leave that decade. Let him fuck teenage girls, live out his Vietnamese girl fetish and shoot defenseless animals in peace–just leave the real stuff to people who actually know what the fuck they’re talking about. If the GOP had any sense (I know, I know, I saw it), they’d stuff his maw with some sweet poontang then tape it there so he’s unable to do anything else EVER. But they won’t since today’s GOP is a big bunch of pussies.

Or, better yet, play him this.