First, some business. For those of you who missed it, I was on Chicago Public Radio’s “The Morning Shift” on August 16th discussing my article about Vivian Maier’s copyright. You can hear my dulcet tones if you so desire.

Oh, and accept no substitutes for my story. In this case, I don’t consider plagiarism a form of flattery. It’s quite the opposite, really.

My fellow Americans, China is kicking our ass when it comes to odd news. It’s embarrassing, but not surprising since China is the largest country on Earth. Odds are with the Chinese that they’re gonna have weird shit happen in their homeland, not just on a daily basis, but hourly too.

A big hat tip to ChinaSMACK for these stories. And to the Chinese for being as weird and whacky as the rest of the humans here.

First, I’d love to write the heds for this publication. I liken it to writing for the Chinese version of the New York Post or The Weekly World News.

When baby Hao Hao was born in June, his parents couldn’t be happier. He’s a male baby born in China after all! China IS the country that’s beaming with pride over its zero population growth, scorn for baby girls, one child policy, and sky-high abortion rate. So, when wee Hao Hao suddenly got sick, it was discovered that one of the nurses had an issue with the wee Asian bairn, and decided to inject him with something that caused him to hemorrhage. You know that’s bad, right? At some point after the injection, to the baby shitting hisself and getting sicker and sicker, the nurse taped the “Lump of shit” note on his noggin. According to the nurse, it was all a big, fat egg roll of a misunderstanding. Turns out, Chinese nurses dig on taping obnoxious notes on one another — you know– to pass the time before they’re forced to return to their gulag-esque living quarters. The baby got in the way and the rest is history. Gotta get your laughs somewhere I guess. Who knew that was even possible in China.

‘Being 30 and Unmarried Should be Illegal and Punished!’

There are over a billion people in China, and they couldn’t find anything else to report on?

Not being married by a certain age is one of the few lifestyle choices that is not illegal in China. According to legal experts, what this old man was yammering about is a ‘moral issue.’

That settles it then.

Edward Snowden should be thrilled he’s not Chinese.

Schoolboys Use Their Shadows to Shade Girls From Hot Sun

My fave sub head in this story: Boys praised as usually being naughty, but having a sense of responsibility at the key moment

It’s hot in China is August, so the normally naughty boys at this particular school, rose to the occasion and shaded their sweltering sisters from the blinding sun. 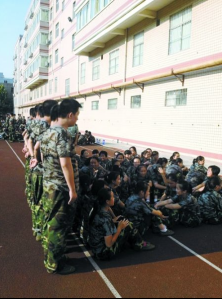 Good luck getting through this graf. It’s one helluva sentence.