I’ve been mulling about writing such a post for a long time. It’s a toughie because there’s so much shitty music out there that’s been poisoning our souls for decades.

Recently, I ran this topic up the flagpole that is Facebook, and received many varied responses. What I hate, others love and what others hate, I love. I toyed with the idea of adding my friends’ responses, but naaaaah … nah … this ain’t about them. If they wanna bitch about music, they can start their own blogs.

Narrowing the list to FIVE isn’t easy which is why I’m working on an installment plan. Stay tuned for more lists like this.

Oh, and these are in no particular order.

1) “We Built This City” by Starship, or Jefferson Airplane or Jefferson Starship or whatever the entire fuck they were calling themselves back then.

This next tidbit made me wanna hurl: Bernie Taupin CO-WROTE this shit sandwich. Yes, possibly the finest lyricist of any generation co-penned this fucker. I do hope he got paid well because this is embarrassing. And Abraham Lincoln jamming in this video? If he were alive today, he’d go back to the Ford Theater for an encore after learning he lip-synched the lyrics.

Seriously, run the fuck over the person with a big, fast car who thought this was a good song to do. This song makes me wanna hurt myself because it’s such a doggie downer. It’s like “Requiem For A Dream” but the song version. When I’m driving, and I hear the first few guitar licks of this song on the radio, I have to change the channel immediately or I’ll slam head-first into the first cement truck I see just to put me out of my misery.

I couldn’t even find the original video for this and you wanna know why? Because even the folks who did the vid think it sucks, therefore, they didn’t relinquish the rights to let folks watch it on the Internets.

3) “What I Am” by Edie Brickell and the New Bohemians.

You know, it physically hurts me to write about this song, but I need to. I gotta get it out…you know..to heal my dark soul.

Let’s take a gander at those bon mots a bit more closely:

I remember when this song came out, and she was allll the rage of my generation. “Oh, she’s so deep–she says that philosophy is as simple as what’s written on breakfast food packaging…”

I thought she needed a bath, and a good stylist. 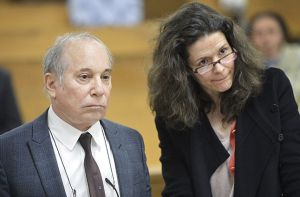 The Paul Simons, in court. (via AP)

Now all she needs is a good lawyer.

4) “Into the Night” by Benny Mardones

I swear, this is the child rapists’ anthem.

Here’s the convo I just had about this song:

Me: He’s a fucking Pervy McPerversons!

Pal: What? (He starts watching the vid)

After a few seconds…

Pal: It’s not like he wants to bang her! He wants pick her up, and fly her around…in the night!

Me: Eww, he’s wearing JAZZ SHOES and they’re on a carpet. She’s wearing nude hose with wedge sandals so I guess it’s ok.

Pal: Why didn’t anyone complain about this when it was originally released?

Me: Dunno. Maybe pervy men weren’t a problem back in the early ’80s.

Pal: Here’s what the lyrics SHOULD be:

She’s not the age of consent
She makes me hard, I say
I’m just a giant perv, mmkay…

Here are some of the lyrics …

She’s just 16 years oldLeave her alone, they saySeparated by foolsWho don’t know what love is yetBut I want you to knowIf I could flyI’d pick you upI’d take you into the nightAnd show you a loveLike you’ve never seen, ever seen
This song is quite catchy–if you pay no attention to the lyrics whatsoever.

5) “Two Princes” by the Spin Doctors

What woman would send a doofus in a stupid cardigan and wool cap flowers? Who would want to ‘talk for hours’ with someone who probably doesn’t bathe and therefore, smells like ass and patchouli?
This song is a suck-fest on so many levels … the cloying guitar riffs, the unimaginative drum line … the insipid lyrics. Oy vey.

They’re almost as sucky as the Counting Crows.