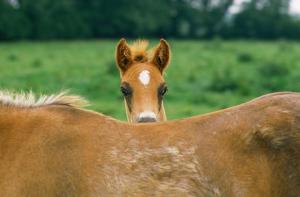 Recently, Congress quietly lifted the 5-year ban on the funding of horse meat inspections, which means horse butchering could start up again in the states in the next month. While I find this completely reprehensible since I adore horses, I’m not surprised. The economy is in the shitter, and Congress is doing piddly-shit crap like this as a lame attempt to jump-start it without having to raise taxes on the disgustingly wealthy. What’s weird is the USDA doesn’t have the budget to do these inspections at the moment, but I’m sure they’ll figure something out eventually.

My feelings about this are contradictory: I find it appalling because of my personal history with horses, and I see the comic material as well. This got me thinking about the names of possible equine dishes at some of the fine and not-so-fine dining establishments in this country. Thanks to Laura Bong, Paul Sloth, Jeff Myers, Ajit Samudra and Jill Weiss for their contributions.

Here we go (with apologies to Lucky Lady, Buttsy, Filly, Thunder, Sesame Street, Desiree, Lady Bug, Charlie and all of the horses I have come in contact with in my lifetime.)

Coming soon to a menu near you!

It’s safe to assume that I’ll be in horse hell where I’ll be stomped, bitten and shat on for eternity.