1) Apparently, scrotal lymphedema IS a real thing. See, I thought I was just being clever when I was a stripper in Greece and needed an authentic-sounding name. Via the DailyMail. 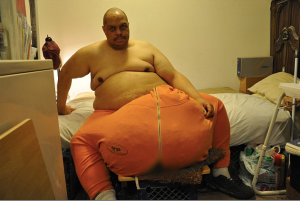 So, Wesley Warren Jr. had a …. wait for it …132 pound scrotum since he was a youngin. He could barely move, and he had to wear an oversized hoody upside down so his scrot could be covered. Plus, he had to lug around a plastic milk crate with him everywhere he went so he has something to place his sack on while he was chilling out. Long story short, he had it removed, but here’s the rub–turns out his wedding tackle is teeny, so he’s having a tough time finding love.

And that’s alllll I’m gonna say because if I say anymore, I’ll get into a heap o’ trouble.

Who knew that screeching like a cat caught in a washing machine with a wombat would actually scare would-be terrorists or pirates or whatever the term is these days?? Britain knows what to do. Their wit cannot be topped. They get it, and those of us across the pond can only give them a slow clap and an approving head nod.

We can’t top it. Seriously, it can’t be done.

I mean, we can but that would involve shooting the terrorists/pirates, but this way only their ears bleed and gets them scurrying from daylight–never to come out ever again.

I’ve never sat through at Britney song so I don’t know just how shrill she is…hmm…there’s no time like the present.

3) Um, I don’t know of a time when it hasn’t been cool for broads to toke up.

Will It Ever Be “Cool” For Women to Smoke Marijuana?

4) As for Banksy, I don’t care what he has to say about the WTC. He should just stick to making awesome scribbles on buildings n’ such. See, this is one of the many problems with the Internets–people who, in the pre-Internet age, wouldn’t get recognition are now getting lots of it. Sure, much of that recognition is good from some folks/causes, but for some, well… NO.

5) Time for a palate cleanser–need to get rid of that Britney mess from earlier.